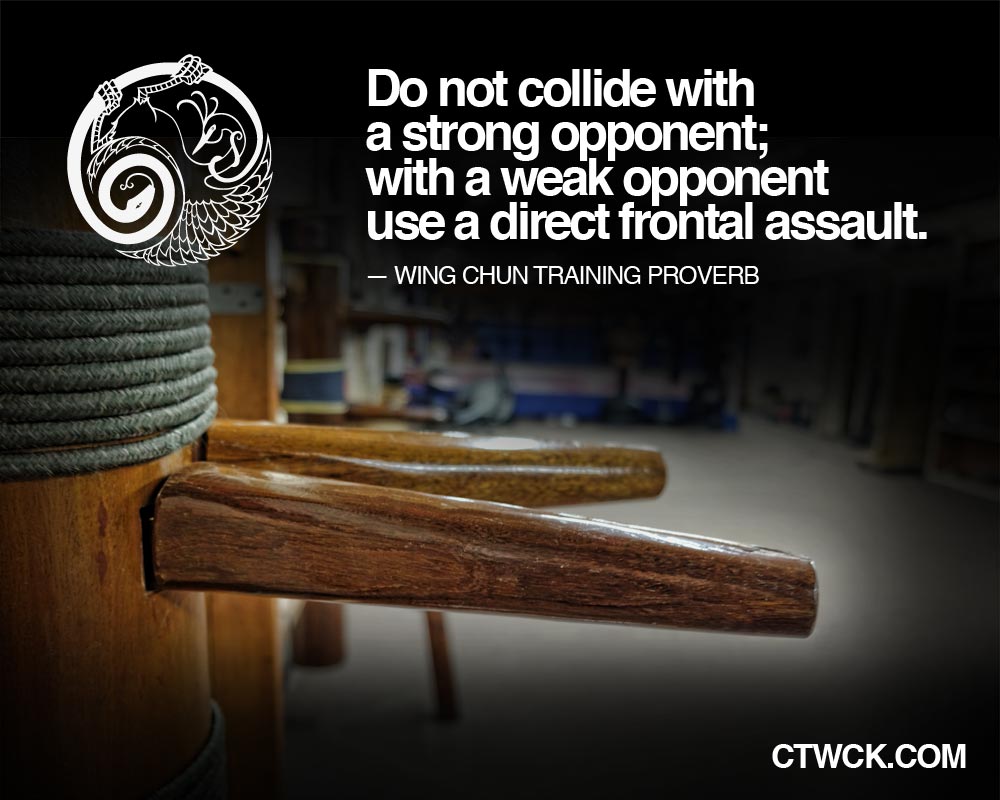 One of the hallmarks of Wing Chun Kung Fu is a primary theory and sets of techniques that allow a smaller and weaker opponent to over come a stronger or bigger one. It’s advised that when going into a full on altercation, one ought to consider a more strategic method, than one of just smashing and bullying your way toward victory.

In the traditional system, this concept is hammered in hard when the practitioner begins to study the wooden dummy.
Because they are usually made of solid wood, it’s impossible to become tougher than the dummy. It is essentially, the hardest, strongest and most powerful opponent one could face.
When practicing with the dummy, it’s important to put emphasis on position, body alignment, and then release of power.
That said, when you hit the dummy, it hits you back with equal force, instantly.
So with instant recoil of power, we learn how hard is too hard, and what position is weak or not.
Eventually the Wing Chun practitioner gains such commanding control of body force power, that they can indeed smash their way to toward victory. Generally speaking, the more effective moves work just along the edge of power going with the flow of direction, and not in a perpendicular collision.   The proverb in this photo comes from the classical writings passed on through Grand Master Ip Man, in what he called the Kuen Kuit ( Martial Songs )

“Do not collide with a strong opponent; with a weak opponent use a direct frontal assault. ”

There are countless proverbs locked away in the classical texts. This is a good one that really spells out this exact method and what considerations there are.  In my opinion, it works as a perfect suggestion to those learning the wooden dummy and looking for high level skill in their Wing Chun.